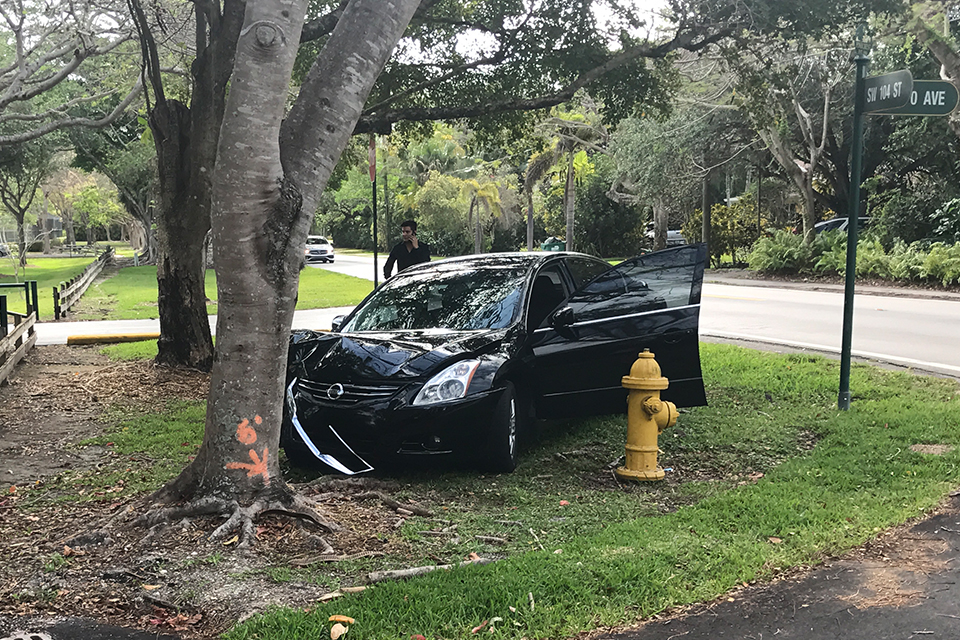 Last week, I had the scare of my life. I was forced to witness the dilemma of ethical conduct that takes over in the most terrifying of moments. It was a Monday morning and I went out running on a path that I don’t usually run. It was rush hour traffic and, as I came up on a main road, I witnessed a terrible scene. A female driving her car going east bound completely cut off a man driving westbound and decided to take a left turn into a parking lot. The westbound male driver honked, braked hard and lost control of his car. He tried desperately to avoid hitting the eastbound female driver and, in the process, his car began to swerve. He was headed straight for my running partner and I. Luckily, the car crashed into a tree that was standing between the driver and us, who tried his best not to hit us.

So here is the shocking part…the woman who caused the accident – fled the scene. She screeched out of the parking lot and tried to escape. A third driver happened to witness the entire thing and chased the woman. He eventually caught her, took down her license plate number and called it in to the police. The female driver should ultimately be charged with leaving the scene of an accident or “hit and run.” But, what about the man who was hit? He is a father of three, was headed to work, and now….his car is completely totaled. The police will not release the other driver’s name or information. His insurance company will not cover the accident and repair the car because they have nobody else to blame yet. And, in the meantime, this gentleman is trying to take his children to school and get to work across town so that he can provide for the kids. At the scene of the crime, the woman ran without even checking to see if the driver who crashed was alive, if there might have been a baby on board, or any other possibilities.

In that moment, I couldn’t help but wonder how could this woman flee. Didn’t she have any sense that her actions would be in violation of any standards of ethical conduct? In that split moment, did her fear drive her to make a bad decision, which we will all do at some point in our lives? What would happen if you blatantly caused a bad accident? Would you run? Would you stop and check on the car driver and any other passengers, no matter the consequence? Well, it’s hard to put yourself in her shoes unless you are intentionally placed in a situation that makes you assess such a dilemma.

Ethical conduct scenarios are present in our daily lives. In our workplaces, in academia, in our community efforts, in our marriages and how we parent. We face ethical conduct decisions when we drive and shop and exercise. In those moments when we do not have time to think, it is often the case that we will make the wrong decision out of fear and uncertainty about the consequences. Unless, we make a commitment to training and openly creating a safe space to discuss these very real choices that face us, we will not be prepared when we face life-changing seconds to make a decision.

I recently met the Regional Director of Compliance for a multi-national corporation in the transportation industry. He shared that his entire compliance group has made a promise that within 3 years, the entire global team will not only be trained on ethics and compliance, but will be forced to put themselves in ethical dilemmas so as to discuss the very real hair-splitting decisions that must be made and the potential fall-out from each choice. I believe that this is a progressive, out-of-the-box approach and quite effective.

As corporations ad professional associations create a culture of conversation around ethical vigilance and ethical conduct, individuals can begin to think about the real life challenges and issues that they could potentially deal with in the future. It is vital for organizational behavior to be assessed, analyzed, talked about and debated as it relates to ethical conduct…in a real, safe, and supportive environment. When individuals are given a solid foundation and positive energy is dedicated to ethical conduct issues, organizations will flourish from a shift in the paradigm of ethics. People will no longer act without thought, but rather have the tools needed to live within their ethical conduct code and make the right choices.

The woman who caused the accident last week got lucky. Nobody was seriously injured. But, she will face serious consequences for her bad decisions. Lets all commit to considering the ethical conduct sets the tone for our daily actions and interactions within our homes, our organizations, our workplaces, and our communities.

How do you think you would have reacted if you were put into this woman’s situation? Think about this: Before the outcome was determined as we now know it to be, there was a chance this woman could have escaped Scot-free and no one would have known any wrong-doing on her part. There was also a chance that she could have fled the scene and got into big trouble (as she most certainly did). Assess your daily ethical conduct and think about choices that you make. I’d love to hear your feedback!

7 Comments on “Is Your Ethical Conduct Out of Control?”

This design is spectacular! You definitely know how to keep a reader entertained. Between your wit and your videos, I was almost moved to start my own blog (well, almost…HaHa!) Excellent job. I really loved what you had to say, and more than that, how you presented it. Too cool!

Awesome! Its genuinely remarkable piece of writing, I have got much clear idea regarding from this post.

Hey there! Do you use Twitter? I’d like to follow you if that would be okay. I’m absolutely enjoying your blog and look forward to new updates.

This design is spectacular! You certainly know how to keep a reader entertained. Between your wit and your videos, I was almost moved to start my own blog (well, almost…HaHa!) Excellent job. I really loved what you had to say, and more than that, how you presented it. Too cool!

You ought to take part in a contest for one of the most useful blogs on the net. I’m going to highly recommend this blog!

“It’s hard to find knowledgeable people on this subject, but you seem like you know what you’re talking about! Thanks”