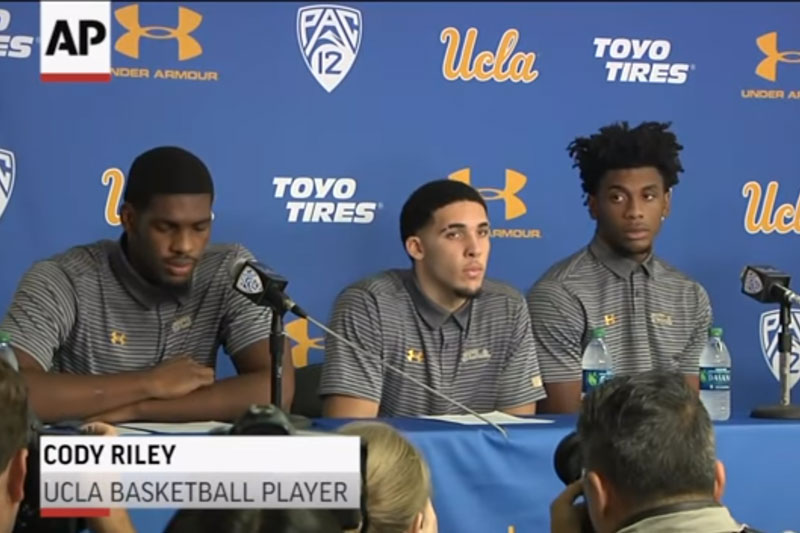 When Facing an Ethical Dilemma, Don’t Play Your Way Off Life’s Court

On a multitude of concrete courts across our country, little boys and girls learn to dribble, shoot, rebound, and pass an orange air-filled ball with black lines into net hoops raised above the ground often at a height of 10 feet more or less. These children practice night and day during their breaks. They tryout for school and league teams in their respective communities. They attend games within their city and, often, spend hours traveling to neighboring towns in and out of state to play in tournaments and to visit other opponents. Sweat, tears, hard work, laughs, and more are expended each day by many of these kids. Their goal is simply to get selected to play college hoops at a Division 1 school. Many high school students are faced with the question of how their college education will be paid for. Often, attending a university is not even an option. But, if you are one of the few that is noticed and thrives with a basketball in your hand and your Michael Jordans on the court, you may be blessed to earn a scholarship to play basketball at a nationally recognized and competitive university. Of course, the ultimate goal – being selected in an NBA draft upon eligibility to do so. One poor decision in an ethical dilemma can ruin all the hard work invested.

3 UCLA college basketball players risked all their years of hard work to get some material, flashy, expensive item by stealing. Freshmen LiAngelo Ball, Cody Riley and Jalen Hall were suspended indefinitely Wednesday, November 15, 2017 from the UCLA Bruin’s men’s basketball team after their arrest in China last week. When facing an ethical dilemma, at least one of the players thought that a pair of sunglasses from a Louis Vuitton store was worth the risk of losing everything he had worked so hard to achieve. I find it quite interesting considering that when I was in college, I had no idea what Louis Vuitton was. But, times have changed from 30 years ago when I was in college! In fact, one of the players is the younger brother of Los Angeles Lakers rookie Lonzo Ball. See “President Trump reminds UCLA basketball players of life’s ‘pitfalls’ upon return from China,” by Tim Bontemps and Cindy Boren, The Washington Post, November 16, 2017.

Well, I also know a thing or two about working my whole life to achieve my goals only to lose it all because I made some bad decisions, rationalizations, and assumptions at that point in my life. In my case, the consequences were severe as I ultimately had to serve about six months of my sentence in a federal prison. Had the UCLA players been forced to spend a considerable amount of time in a Chinese prison, I am sure it would have been less than pleasant. When I finally had that soul searching revelation and understood that I was wrong and made many bad decisions in my ethical dilemma, I decided to plead guilty to a federal crime. I chose to proactively call almost everyone in my life and take responsibility for what I did. I knew that I needed to be accountable and “Own It.”

I made a nerdy spreadsheet with columns of information for all my contacts.  I called friends from childhood, college, my New York Wall Street days, law school, and work friends.  I dialed my running, cycling, barre, and yoga buddies.  I reached out to my mentors, colleagues, judges, and politicians who knew me at my core.  In each phone call, I was brutally honest.  I explained what I did, what was the situation, and then I asked for help.  I believe 100% that one of the reasons I continue to grow is with the support of others around me, which I know is due to my having taken full responsibility for what I did.  I also learned that I could be vulnerable, allow myself the freedom to admit that I am not perfect, and I was then stronger, more empathetic and others understood and continued to believe in me.

Yesterday, UCLA held a press conference for the three players upon their return from China and each young man “Owned It.” They know they had failed the ethical dilemma that life presented. “I’d like to start off by saying sorry for stealing from the stores in China…I didn’t exercise my best judgment, and I was wrong for that.” LiAngelo Ball made this courageous statement during the press conference. Now, ultimately, the college will determine their punishment. There are academic and athletic concerns. I believe, that these young men are capable of redemption. They can open their eyes to their bad decisions, learn from them, and use their position as a platform to help other young men and women who value material things to the expense of their own safety. There should be an opportunity for the players to speak to younger athletes of the risks associated with making bad decisions. They can serve as a role model and cautionary tale for others on what NOT to do. “Sometimes, especially when we’re young, we don’t always see the long-term effects of our behavior. But, make no mistake, accepting responsibility – both personal and indirect – is a major factor in receiving the respect and admiration of those around you.” “Do You Accept Responsibility for Your Actions?” Shawn Jackson, goodchoicesgoodlife.org. Community service hours could easily be satisfied while simultaneously offering mentoring and wisdom to the community.

Having personally many bad decisions when I faced an ethical dilemma, I do believe in consequences for our actions. UCLA will determine their academic punishment and whether or not these young men are allowed to play for UCLA men’s basketball team again. However, I for one, am a strong believer that each person can learn from his/her errors and propel himself as a pillar of strength for the community from where he comes from. We all should have the freedom to take responsibility for our actions and accept that we are not perfect beings. All we can expect of ourselves is to try our best in each moment and strive to be ethically vigilant. Don’t take yourself off life’s court when faced with an ethical dilemma. But if you do slip, own it.

“In the long run, we shape our lives, and we shape ourselves. The process never ends until we die. And the choices we make are ultimately our own responsibility.” Eleanor Roosevelt