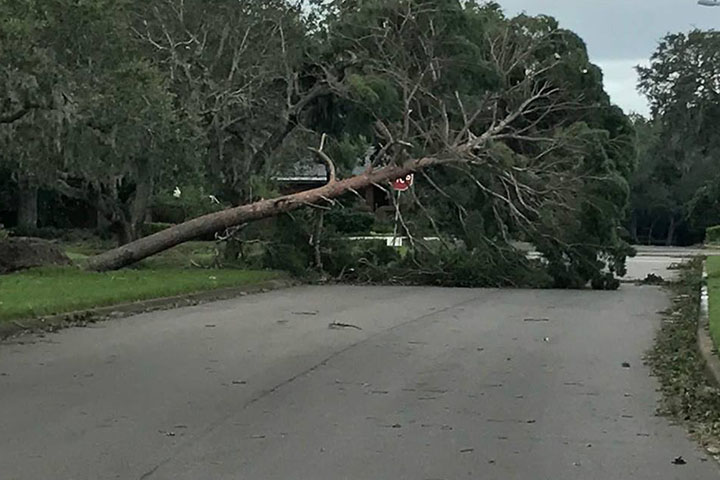 Hurricane Irma swept through the Florida Keys, and caused serious wind damage to the southern tip of my home state, Florida.  I have lived in Miami for essentially my whole life and dealing with the threat of Hurricanes has become the norm for us Miamians.  But, this time it was different.  Maybe because it was almost exactly 25 years after Hurricane Andrew hit Miami and destroyed my home.  Maybe we were scared because the storm named Irma was the largest hurricane ever in the history of the Atlantic Ocean.   All the news media repeatedly showed a massive fiery red circle with a defined eye whirling toward the Caribbean and Florida.  The track was so ill-defined with room for errors on both sides.  The periodic updates every three hours would reveal a slightly altered track either more west or east, shifting northbound at a later point or earlier point.  The uncertainty was maddening.  I packed up my entire home as if I was moving out.  I took all the pictures off the walls, took all the items off countertops and furniture tops.  Double bagged them and then put them inside large furniture armoires in hopes to protect my valuables and pictures.  I rolled up all the rugs in the house and covered every piece of furniture with large heavy plastic tarp.  And I left with my children, my dog, my mother, and the rest of my family.  After waiting for 7 hours at the Ft. Lauderdale airport, Spirit Airlines cancelled my flight at 11 pm at night!  I was exasperated along with everyone else.  But, I managed to keep a positive attitude and make the next decision.  I was trying to be a role model in a very challenging moment for my children to see how to handle these types of life experiences. Being ethical in difficult moments is rarely an easy task.

We made a decision to retrieve our baggage and load up the car. After emailing my probation officer to update her on the cancellation and my change in plans (I have to seek approval to travel out of my district for any reason), we were on the road north by midnight towards Orlando in hopes that we would be able to stay with our close family friends.  The entire week was chaotic, nerve-wrecking, and scary.  I had never before felt that I might return to nothing.  I have never before been in an evacuation zone.  We spent the next six days in Orlando and I am so thankful for our “family” in Orlando who welcomed us.

Most of South Florida and the Florida Keys were seriously affected.  And, as is now so painfully evident around the world, the Caribbean including Miami’s beloved Puerto Rico has been devastated due to the multiple storms this year.  The loss of electricity, water, and basic availability to meet our needs creates stress.  In addition, it is HOT in South Florida and these surrounding areas.  Ultimately, I was without power or water or internet or phone for twelve days.  It was uncomfortable and annoying.  The disruption to our lives caused a new surge of emotions amongst our community members.  Energy company officials were now being pitted against local leaders and municipal decisions made since the last hurricane. But, in reality, our experience pales in comparison to the real challenges that people face around the world.  Children are enslaved to work, women are trafficked, war prevents any sense of normalcy, and people are faced with serious diseases.  In the face of these circumstances, being ethical is our responsibility. We must live as examples for others that even in upsetting times, we can still make good decisions, decisions that consider what is right and good for all parties.

My mission is to help people realize that being ethical, what I like to call ethical vigilance, is a moment-by -moment proposition.   During these unsettled times, I heard some shocking stories that were troubling.  A man in South Miami decided that it would make sense to find an energy worker (so many hard-working men and women sacrificed time with their families to drive down to south Florida and assist Florida Power & Light in order to help restore power in our communities) and bribe him to restore power immediately to his home.  Did that gentleman believe that he was entitled to power quicker because he had extra money and was “able” to offer a bribe?  Do families that are in upper class neighborhoods deserve to have their power restored faster because they pay more per month to the utility company by the mere fact that their home uses more power because it is bigger?  If this man had extra money laying around, why didn’t he use his funds to help others less fortunate than them, such as those in the Florida Keys who also did not have power, but could have used water and food?  Do you think it was wrong for this gentleman to try and get his power restored by offering money as a bribe?

I also read about a Florida senator who used her connection with a senior executive at FPL to seek special favors for power restoration within one day of the hurricane hitting South Florida.  Granted she was seeking electricity for a family member who needed to be on an oxygen machine.  But, here is the problem, there were thousands of people needing urgent medical care due to lack of power, even in the hospitals, let alone in private homes.  Do you think the senator was being ethical to pull strings?

I believe that we are faced with daily decision to do the right thing and be ethical.  Even in those moments where we want to be selfish perhaps, it is important to pause, listen to our inner voice, reflect, do an ethical reality check, and then make the best conscious decision that we sense is right, no matter the consequence!

2 Comments on “Hurricane Irma: Being Ethical in Difficult Times”

Thanks for sharing Rashmi. As humans, we have a tendency to focus on external things, like Irma, for example, or the person cutting you off in traffic or being rude at the grocery store. We focus on money, and money-getting, possessions (bigger this, bigger that), but life is largely an inside job. If we would spend a fraction of the time clarifying our inner person, rather than what is external, we would make better decisions. In essence, we need to know who we are BEFORE Irma hits or a financial crisis or a health issue or whatever. A crisis will never “produce” ethical decisions. It will only reveal our ability or inability to make them. That’s why the inner game is so important. Blessings,

Thank you for your perspective and shifting the focus towards our inner voice. I agree that we must listen to our inner voice at all times in order to make the best decision that we can that we sense is right. We must make a commitment to honor that gut feeling – no matter the consequence. So, then ultimately when challenges arise, we are equipped and armed to choose the ethical path.