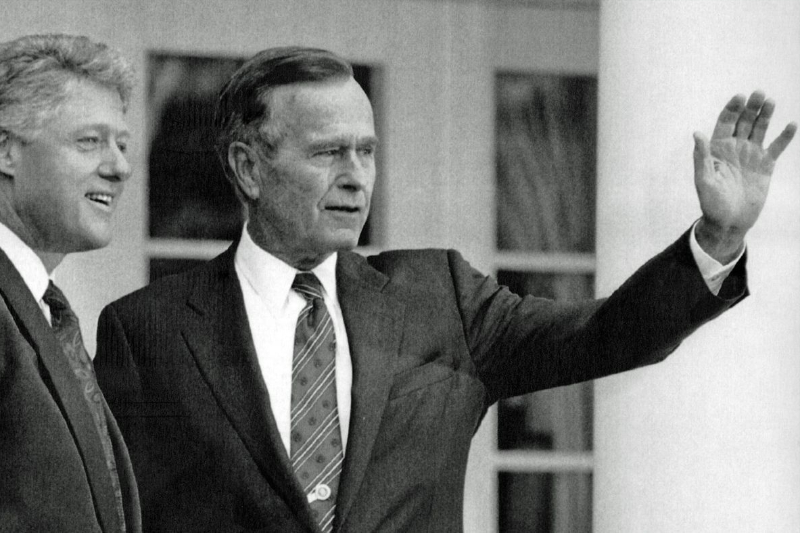 Leaving a Legacy of Integrity and Values

In summer 1992, I was a rising Senior at UNC-Chapel Hill and had fallen in love with politics and advocacy. As I joined my friends and many others in a grassroots effort to get out the vote, I began to get heavily involved in the presidential campaign. Bill Clinton, Governor from Arkansas, was running against President George H.W. Bush. Ultimately, I helped coordinate the college effort in North Carolina for the Clinton/Gore campaign. I grew older and George W. Bush then served as President.

Its 2011 and I distinctly remember walking into a huge ballroom in a Dallas hotel to listen to President George W. Bush speak. I was attending a conference and President Bush was the Keynote Speaker. I recall being skeptical and unsure of even going that morning. As he finished, I rose with others for a standing ovation. I now understood why he was liked by so many. I admired his dedication to his family and I laughed at his self-effacing jokes. I learned to respect President Bush in a new way, though I never did agree with many of his actions and policies.

On Wednesday, December 5, 2018, along with the millions of others across the globe, I watched and listened as our 41st President was honored and remembered. With each eulogy, I felt a newfound respect for President Bush Sr. I can honestly say that I learned so much about a gentleman who gave his life to public service. As the ceremony concluded, there were several themes that defined the day. President George H.W. Bush will be remembered as a man of loyalty, integrity, family, friendship, service, and faith.

He has left his legacy through his family and so many others whose lives he touched. President George W. Bush honored his father in a powerful eulogy. The passages that really hit home for me were:

“He valued character over pedigree. And he was no cynic. He looked for the good in each person – and usually found it.”

“Dad taught us that public service is noble and necessary; that one can serve with integrity and hold true to the important values, like faith and family.”

“He recognized that serving others enriched the giver’s soul”

“He accepted that failure is part of living a full life, but taught us never to be defined by failure. He showed us how setbacks can strengthen.”

And the quote recalled from his father’s inaugural address:
“We cannot hope only to leave our children a bigger car, a bigger bank account. We must hope to give them a sense of what it means to be a loyal friend, a loving parent, a citizen who leaves his home, is neighborhood and town better than he found it. What do we want the men and women who work with us to say when we are no longer there? That we were more driven to succeed than anyone around us? Or that we stopped to ask if a sick child had gotten better, and stayed a moment there to trade a word of friendship?”

Each of these quotes is so powerful and makes me think of the power of culture and integrity and values. The Bush family is considered by many as one of service and loyalty to our country as well as to each other. The values of family and friendship and humility run deep among this family. President George W. Bush maintained a culture as the patriarch that ensured his family would learn and grow with these principles. Were there mistakes and failure along the way? Of course, they are human. But he created a safe space to learn from the failures and wrongs to march ahead and do better, to be empowered to forge forward.

As I now spend time with C-Suite and Board leaders examining organizational culture and how to connect the values of a company to human performance within the organization, I am inspired by the life of President George H.W. Bush and the loving words said for him on Wednesday about leaving a legacy of integrity and values. I believe it is imperative for organizations to create and maintain an organizational culture where integrity and service to others is valued. To lead by example and be humble. To take ownership when things go south, learn from those experiences, and create new strategies for growth in line with the culture of integrity. Thank you President George H.W. Bush for you life of service and humility for others.