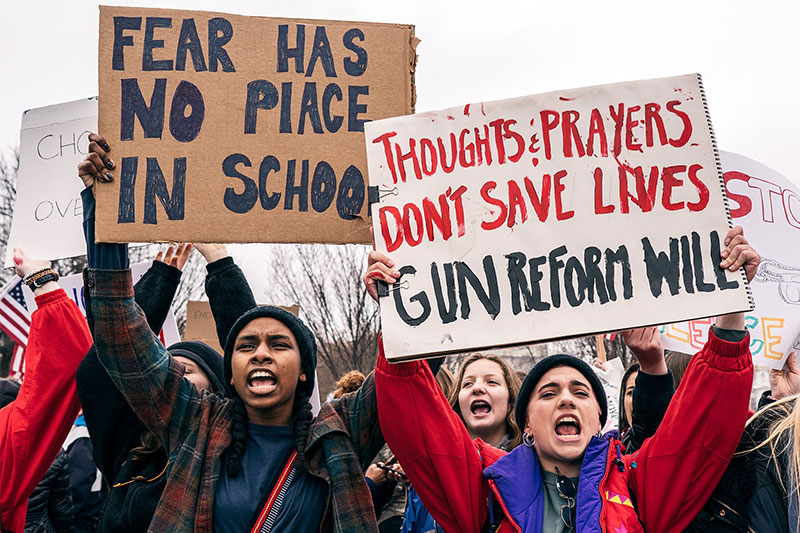 Speak Your Truth Through Activism

“You must speak your truth, no matter the consequences.” -Rashmi Airan

At around 4:00 in the afternoon on February 14th, 2018, as I drove home after picking up my son from volleyball practice, I happened to glance at my phone and catch a headline that read something like: “Parkland, FL school shooting by lone gunman.” My mind went into high alert as I remembered that one of my dear friends who I had worked with 25 years ago in New York City had recently moved to Parkland from the New York area with his two daughters and wife. The family of four spent some of Labor Day weekend with us and our children had so much fun hanging out as the were all in middle school. I did not remember which school the girls attended in Parkland, but it didn’t matter in that moment. I picked up the phone and called my friend. He immediately answered and I could hear sirens in the background with mayhem. I hurriedly asked him if his girls were okay because I had already figured out they must attend the school that I just read about in the news. He told me that his younger daughter was securely locked down in the middle school and that his oldest was in the room next door to where the shooting occurred, but thankfully she was with him and his wife and safe. Over the next few days and even until now, we have communicated and I have empathized as much as possible to give him strength for his family and fellow fathers, who lost their daughters. Young women who moments before were learning and socializing.

After this horrible tragedy, the world saw passionate and empowered young men and women speak out and take a stand. Marches, t-shirts, statements, songs, protests, questions, speeches, and more. The boys and girls from school grew up overnight into advocates and leaders. No matter where you stand on this issue that is under controversy, I think its important to point out the invaluable and monumental expression of support across the country by universities and colleges. Can you imagine that in the midst of having a voice and standing up for what you believe in with courage, you are in the same moment terrified of possible disciplinary action which could negatively affect your college application that is still pending?

I recall my grandfather who fought for what he believed in no matter what during the Quit India Movement in India against British Rule alongside Mahatma Gandhi. He never knew for sure if he would be successful, and he also generally knew that if he had been caught, he would end up in prison once again. But, he was a fighter with a tenacious spirit who fought on regardless of what the punishment might be. These students essentially are taking this approach. Nationwide, students are creating their own movements and walkouts from class. In my daughter’s school, they instituted a student-organized and student-led rally by wearing white t-shirts and walking out of class at noon and congregating at the center of campus. The administration supported it and discussed the power of activism and standing up for what you believe in. To fight and have your voice heard. But even if the administration did not support it, you must speak your truth.

Universities nationwide began to take notice. Then statements such as this one from Harvard:

The mission of Harvard College is to provide a deeply transformative liberal arts and sciences education that will prepare our students for a life of citizenship and leadership. As always, those who engage responsibly in exercising their rights and freedoms would not have their chances of admission compromised.

And this from MIT:

We have long held that students should not make decisions based on what they think will get them into college, but instead based on values and interests that are important to them. We believe students should follow compasses over maps, pursuing points of direction rather than specific destinations and trusting they will end up where they belong. As such, we always encourage students to undertake whatever course of action in life is most meaningful to, and consistent with, their own principles, and not prioritize how it might impact their college applications. We do not expect or prefer any particular choice in the abstract, and even if we did, it shouldn’t change what students do.

Suddenly, it began to penetrate our twitter feeds. The world sat up and took notice. It’s a breath of fresh air for admissions officers nationwide to take this powerful and courageous stance and inspire students nationwide to do the right thing and speak their truth.

I remember making my voice heard in college for multiple issues at UNC-Chapel Hill. I did sleep-ins, walked Franklin Street to fight for a cause, put up posters, organized rallies, and protested serious causes. Equal rights for all employees on campus, fair treatment of the labor workers, educational issues, and more. It is imperative that we always remember to Do the Right Thing, Push forward for a Cause and Make Our Voices Heard, even when you don’t really know what the consequences are or whether you will eventually create change. But, choosing to do the right thing in the face of uncertainty is the ultimate test of ethical decision-making. You must speak your truth.